Lookit what I made!

I first encountered White Birch‘s amazing self-striping colorways at Stitches East.  I picked up two skeins of her DK-weight 100% SW Merino, in part because I recognized the base yarn (Crazy Eight, from Wool2Dye4).  I’m familiar with Crazy Eight, because Kate uses it too!  I love this bouncy 8-ply yarn that straddles the line between sport and DK. Knowing the base made it easy to invest in the dyer at White Birch — and her self-striping colorways are fantastic, so I really wanted to take some home. 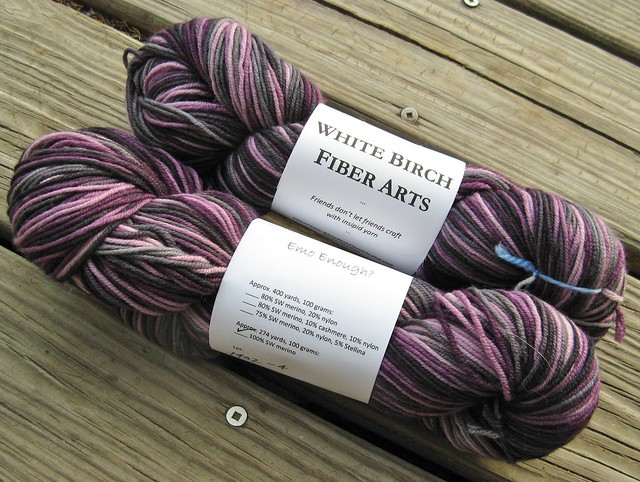 Finding the right pattern for this spectacular colorway — “Emo Enough?” — took some time.  I cast on a number of projects and ripped, ripped, ripped. Eventually I settled on the Knitted Scarf Butterflies pattern, marking my first time doing entrelac.  To my surprise, the back-and-forth rhythms of entrelac knitting were soothing and fun! Each tier of tilting rectangles feels like an accomplishment. Each rectangle has a single cable cross, further livening things up.  This isn’t entrelac for newbies, but it certainly is a nice, chewy knit — and the results speak for themselves.

Alas, my yarn didn’t go as far as I’d hoped … my FO was not quite long enough for a scarf or doubled-up infinity scarf, and was a bit long for a single-loop cowl.  No amount of thuggish blocking got me anywhere near the length I needed, so I played a bit with it in the mirror, and decided that some buttons and i-cord could bridge the gap.  I’m quite happy with the result, and may use this “shape” again with an otherwise-awkwardly-short scarf.

This design has been in the works for more than a year!  I’m pleased to bring you Rapid Eye Movement — a wrap, or a cowl, or a little bit of both: 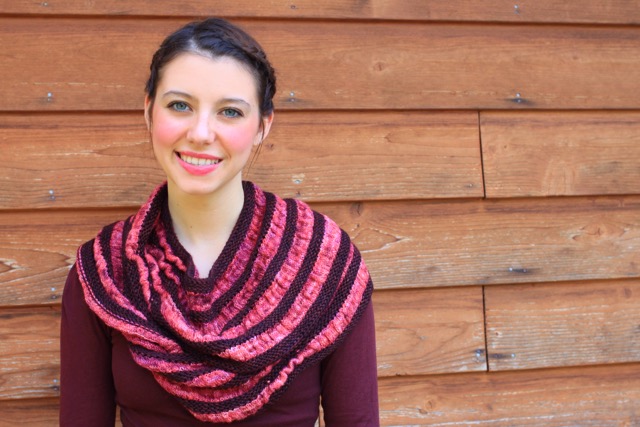 Many thanks to Dream in Color for their generous yarn support, excellent photography, and pattern layout! Rapid Eye Movement is part of the upcoming “Duets Collection” — kits will be sold through local yarn shops starting in early 2015.  (Ask yours to carry the kits!) 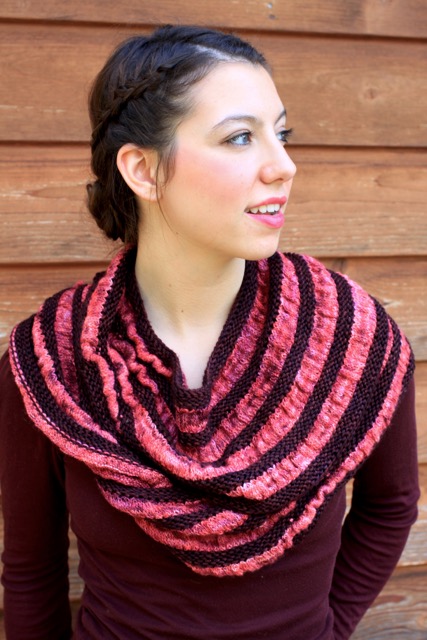 This shape of this design is inspired by the rhythms of dreaming. Sleepers alternate between periods of deep sleep and periods of lighter Rapid Eye Movement sleep. REM sleep is associated with creativity, learning, memory, and dreams. Coincidentally, my initials growing up were REM. I shared this monogram with my Grandpa, who is a philosopher, a doctor, and a maker of things. I learned a lot about creative thinking and science from him; he’s always encouraged me to dream big. 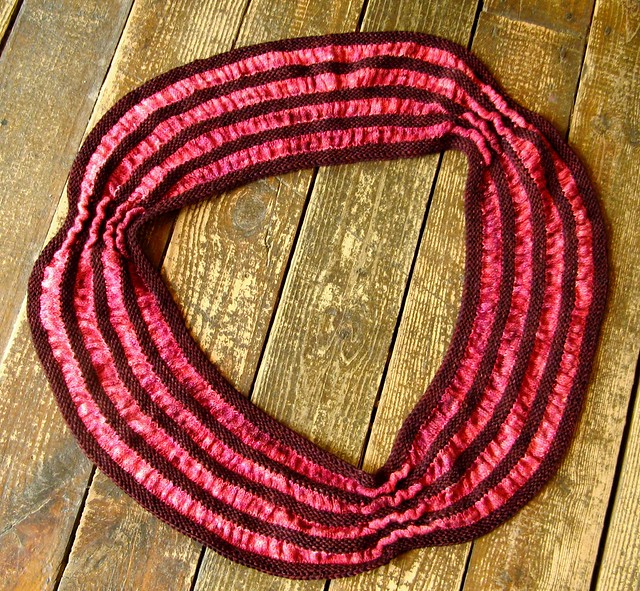 This design uses alternating rings DIC Classy with Cashmere and Wisp. The Classy forms the arches of the wrap, and gathers the Wisp ruching together at three equally spaced locations. The wrap can be worn with one set of gathers at one shoulder for an asymmetrical look, or doubled up as a cowl. I would suggest a dark tonal colorway for the Classy-with-Cashmere, and a lighter, more variegated colorway for the Wisp. 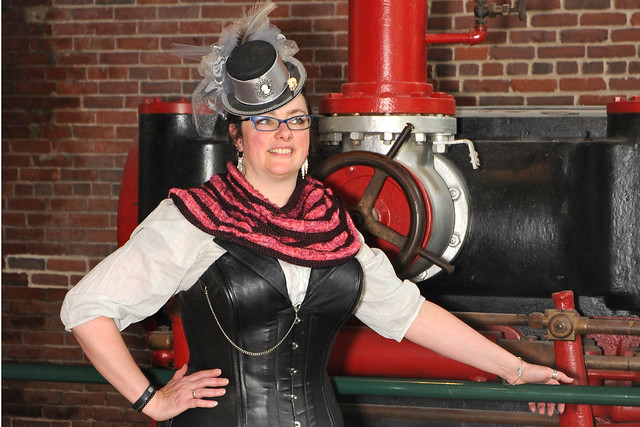 Things to ponder… Who blew the great horn of Helm Hammerhand? Was Saruman experimenting with explosives? Whatever shall I do with this high-contrast variegated colorway? 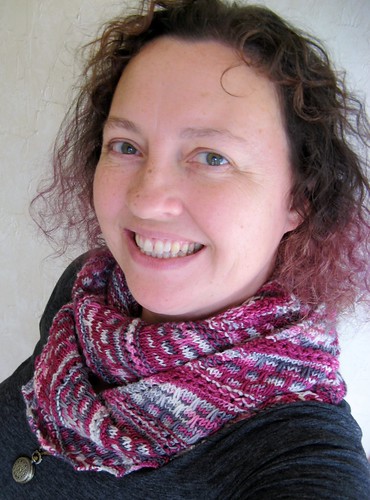 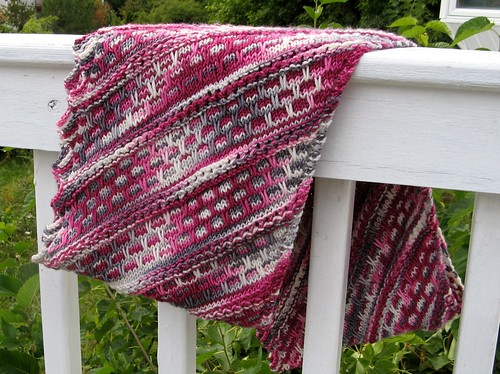 Hornburg is knit flat, using a clever trick of construction to result in a circular cowl with no sewing or picked-up stitches. No, really! 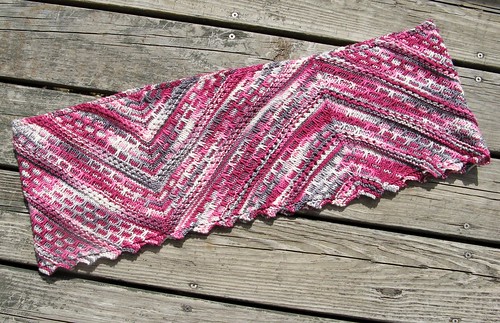 Although designed for a bouncy sport-weight yarn (like Aesir), the pattern is readily adapted to other weights of yarn. Use needles sized appropriately for your yarn, and add (or remove) repeats of the bias strip pattern as desired. Naturally, yardage required will vary with size of yarn and needles.

This is my third cowl from Sivia’s series — I’m definitely enjoying them.  This is a mobius, with a sweet little lace bind-off and perfectly placed button.  I love it.

I have a new favorite FO!

This was, simply put, the perfect pattern for this yarn. The long color repeats are highlighted by Molly’s short rows, and the rib/ruffle design was forgiving of handspun irregularities. It was a delightful knit, very fun and rewarding every step of the way.

I used needles appropriate to the yarn, but kept the stitch counts the same, so my Molly is a bit wider than the original. I hoped that I would have enough yarn to make a long enough scarf for a loop to work — both as a single-loop long cowl, and doubled up.  I had juuuust enough yarn to accomplish this goal — it is super cozy doubled up, without strangling me :).

I finished, finally! 🙂 I give you … a very BRIGHTLY colored cowl/wrap:

Yarn: A Hundred Ravens Iachos in “Midst Her Fires”

Two skeins of Iachos ends up being not quite enough yarn for a Rhea Silvia.  If I’d read the pattern thoroughly, I would have know this. Instead, I got caught off guard … fortunately, I was able to bind off a row or three early on both edges, and it still looks pretty good.  Even with blocking, I’m finding the border flares more than I like.  If I make another Rhea Silvia, I’ll probably decrease more when transitioning from the cabled body to the border in order to limit/eliminate this flare.

That said, I’m delighted with the end product! Kate’s yarn shines (glows, even!) in this pattern. The striping and pooling of hand-dyed yarn can be SO much fun!  I’ve been wearing it doubled-up (see below) and getting lots of compliments.

I made some mitts!

The Fried Chicken Mittens pattern is one of my favorites.  The mittens fit great, and the pattern is quick and easy to followp So, when my eldest son asked for a pair of warm mittens for outdoor track practice this winter, I knew exactly which pattern I’d use.  Yarn choice was fraught — he wanted “dark blue or dark grey” with little or no color variation.   I showed him some tweedy blue from my stash, and he wanted to know what “all those white flecks” were for :). No go on the tweedy blue. Fortunately, I found the perfect skein of plush worsted merino at NEFF:

I was a little afraid it would be TOO heathered for his delicate sensibilities, but lucky for me — he gave the subtle colorway the official teenage thumbs up. Since he had originally asked for mittens, I started making mittens.  About halfway through the palm I did a fitting, and he asked if I could “stop making them before the fingers closed.”  After a quick conversation I realized he was asking for fingerless mitts, so that’s what I made.

He liked them so much, he let me take a picture or two!

This week I started (and finished) a quick-knit hat in a new Classic Elite yarn, Ava. It’s sparkly!  The sparkles match the colorways!  Purple rules!  Here is my version of Bastille.

I also cast on for a new Sivia Harding cowl, Wild Iris. I’m using a skein of Tosh Light in Mare that I’ve had stashed for some time now.

I’ve been waiting and waiting for the solid colors of Liberty Wool Light to come out … lucky me, here they are!

Here’s my yarn for the Fractal:

I finished a cowl!

Available: $6 as a single pattern, or $26 for the 7-pattern collection

Yarn: The Fibre Company Road to China Light in “Malachite”

Another great cowl from Sivia Harding! I am very glad that I bought the whole collection :).  This one starts as a mobius, and transitions to a round cowl (much like another of her designs, Harmonia’s Rings, but on a smaller scale).  I took the opportunity to work with Road to China Light for the first time … um, wow.  Now this is a yarn I’ve been petting and visiting at the shop for quite some time — it is so, so, so soft, with gorgeous undulating tonal hues.  But the alpaca/silk/camel/cashmere combo means that it is wicked warm and felts if you look at it funny.

Just as an example, I wound both skeins into cakes at the same time.  The 2nd cake rolled around in my project bag for about a month while I worked through the first cake.  The strands of yarn on the outside of the 2nd cake were felted to each other, just from this mild agitation. This isn’t a yarn I could use for a garment — it would surely condense into rigid felt at the mere thought of sweaty armpits.  But for a cowl — it is delightful! Perfect!