It’s been a long, long time since I published a new pattern. Suffice to say, it’s been a tough couple years. This particular design has been on the needles since May 2019, when I saw the Resolute Lady mini set from A Hundred Ravens and absolutely fell in love:

You see what I mean? Starting with this delightful colorway as inspiration, I returned to some previous designs as a touchstone: my Hillcrest and Charm both use instarsia to create a stained-glass feeling with garter stitch blocks and i-cord “leading.”

I had a few false starts, but soon enough I found the right balance of color and contrast, and I love the way minis let me control exactly when and where the “steps” begin and end.

Last week the pattern cleared my tech editor, and I managed a mini photo shoot — no worries, I stayed socially distant from Matilda, my model :). Mormont is now available on Ravelry.

Also, keep your eyes peeled for an upcoming Mormont KAL with Kel from A Hundred Ravens! There will be prizes …. just saying.

Be a knitting mixologist with the Happy Hour Shawl! Choose from a variety of lace patterns and stripes to create a unique cocktail of color and fiber that pleases you.

The Happy Hour Shawl is worked from the top down, beginning with a triangle and moving into heart-shaped wings. The sample follows the “fancy” charts for both the start and finish; the pattern includes the stripe sequence used in the sample.

This design calls for two skeins of fingering-weight yarn for the main color and 5 minis (at least 50 yards each). For the main color, choose a fiber that blocks well (wool, for example), but for the minis feel free to experiment! Silk or linen could be the perfect garnish. Color choice determines the intensity of your finished shawl. Go bold or subtle … the choice is yours.

Full written translations of all charts are provided.

It’s that time of year again! The Indie GAL begins tonight, an 8pm EST, with a week-long pattern sale.  A stunning 335 independent designers have put their best gift patterns in the sale — the thread with all the patterns is inspiring, all by itself!  Use coupon code giftalong2015 to get 25% off any (or all) of these awesome patterns. The sale ends at midnight EST on Friday, Nov 27th.

The sale is just the beginning of the GAL fun — from today until Dec 31st, there is a massive KAL/CAL in the Indie GAL forum on Ravelry.  You can participate with your newly-bought sale patterns, or with any pattern by any participating designer. Seriously! 🙂  There are tons of great prizes up for grabs, and lots of ways to win.  (Go check out the threads for details on rules and winning.)  There are 2300 electronic prizes to win, plus additional physical prizes donated by designers and the fiber community in general.

My toy Octopus pattern is one of many great one-skein projects in the newly-released One-Skein Wonders for Babies.

Little Lovey (or Kleine Acht, as I like to think of her), is made of Classic Elite Yarns Seedling Hand Paint. It’s a quick project with very little sewing — something of a novelty in the world of hand-knit toys.

I’ve had a copy of the book for a week or two now, and I’m pleased to say that it is chock-a-block full of great designs.

A few of my favorites:

The Smocked Lace Hat and Mittens (p.10) by Terry Morris caught my eye right away. I love the charming edge and flower topper on the hat.

The Baby Crown Tee (p. 53) by Jenise Hope is so freaking adorable, and looks like one of those quick-ish knits that will impress as a gift.

Robin Allen‘s Happy Hat makes me smile! Fabulous use of knits and purls to make a graphic design.

I just finished the picot bind-off on Glinda, an upcoming Mystery KAL.  The MKAL will start in September — I still have photography, testing, and tech editing ahead of me — but for now, I offer you this sneak peek of a tiny corner of the finished shawl: 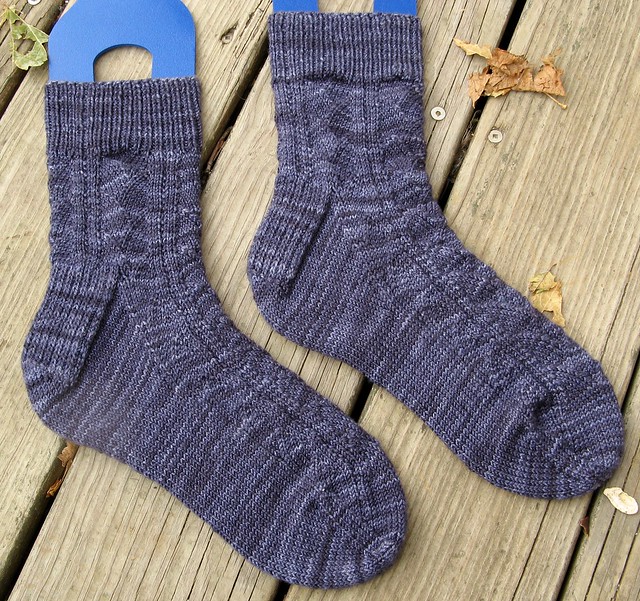 This is the fifth and final pair of socks commissioned by my mom — I was glad to deliver them to her!  I’ve made a LOT of socks over the years, but I haven’t made enough for me lately.  Some of my first pairs are slowly giving up the ghost — worn beyond repair.  Le sigh. Time to make more socks for me! 🙂

I made something crochet! And I liked it! 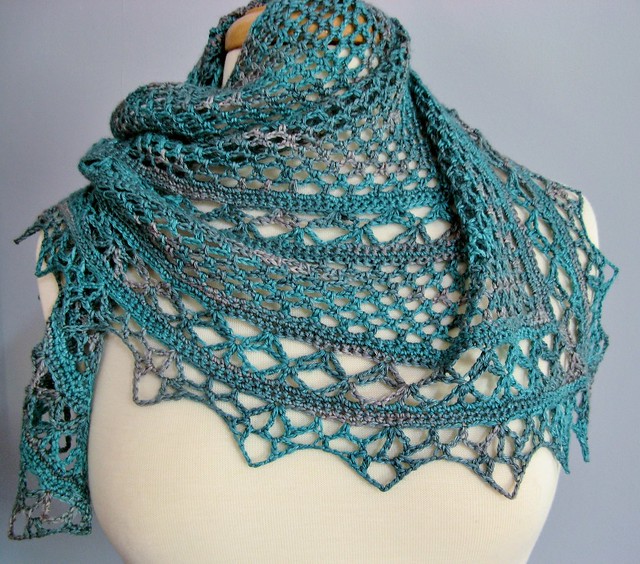 Pattern: Over the Willamette

Ever since I saw a sample Willamette in Kate’s booth, I’ve been dying to make one.  I’m happy to report that the pattern was do-able even by a rather inexperienced crocheter like myself.  It helpfully includes full written instructions to go with the crochet charts (or are they graphs?), so if I was in doubt about something, I could easily double-check that I was on the right track.

As usual, Llyr is a delight. Smooth and pliable, and blocks like a dream. 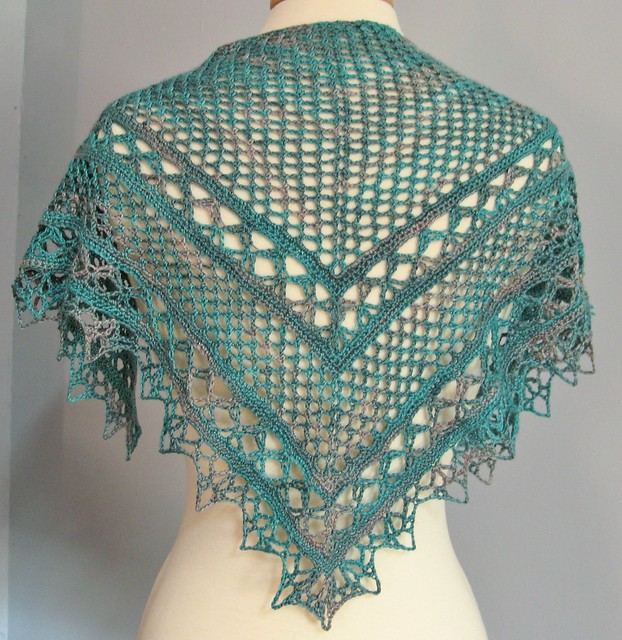 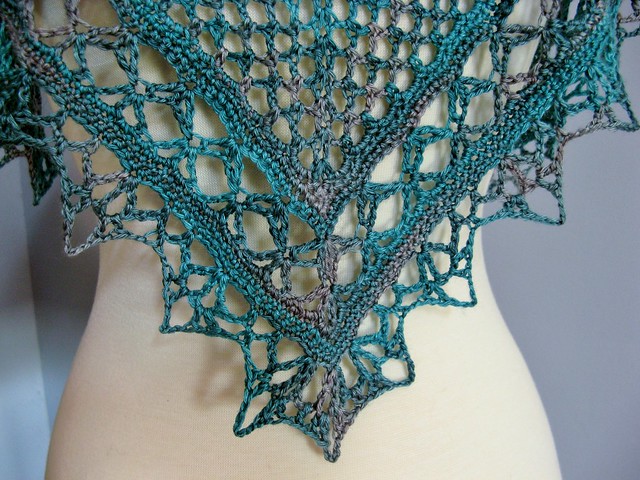 As part of the Indie GAL of 2014, I have been talking to Allison LoCicero (aka frecklesandpurls) about her experiences as a knitter and designer.  She is a relatively new designer, which means all five of her patterns are part of the GAL sale! (The sale ends this Friday at midnight EST, hint hint.)

I’ve had one of her patterns queued for a long time, so I took advantage of the GAL sale to buy myself a copy of Pesto:

It seems like it would be perfect for just about any single skein of tonal-ish sock yarn … something I have a habit of acquiring.  It also seems like a pattern I could use with some handspun — it would look good in just about any weight yarn, and the sideways construction means I can just knit until half my yarn is gone.

What got you started designing?  Was it intentional, or did it “just happen”?

It sort of “just happened!” I wrote my first pattern (my Entrelac Scarf pattern) bac

k in 2006. This was before Ravelry (in the dark ages of knitting…) and I was teaching myself Entrelac and looking for a simple scarf pattern online. I could really only find one and it was so unclear and filled with mistakes that I thought to myself “I can write a better pattern than this!” so I did just that and offered it for free on my blog in case someone else was interested in it! It was downloaded a LOT more than I expected! And then when Ravelry came along, someone added it to the pattern database in the very beginning and its popularity grew from there. Once I got on Ravelry (I was still waiting in line for an invite while my pattern was already inside partying it up with everyone!), I moved the pattern from my blog and made it a free Ravelry download. Fast-forward about three years and my husband and I were moving to Mississippi for his job. I had been a medical librarian for years and liked it but didn’t love it. I knew I wanted to see if I could crack into the knitwear design industry and this was my opportunity to do it. I read and studied everything I could get my hands on about design and took classes offered by knitting greats like Stefanie Japel and Shannon Okey and finally got the confidence to release my first paid pattern (Flower Market Shawl) in October of 2011! It was thankfully well-received so that helped me breathe a sigh of relief! But I still didn’t release another pattern for two years! Ack! It was hard for me to put my work out there and hope that people liked it enough to actually buy it! But my confidence as a designer is growing! And the list of designs in my head is really growing so I’m designing more regularly now and loving every minute of it!

Of your patterns, which are you most proud of?  Why?

I will probably say my Flower Market Shawl because, like I mentioned, it was my first pa

id pattern and a TON of work and love went into making it as perfect as possible and releasing it into the world was kinda scary. I’m so happy to see that it’s still one of my most popular patterns. I wear my own Flower Market Shawl a lot! It’s a very special knit to me. Like my “first born” or something! 😉

Not at the moment! I have three self-published shawls in various stages of design that I hope to have ready in the coming months. I’m going to slow things down a little over the holidays and do some holiday knitting and enjoy time with my family and friends and will really ramp back up with those in January!

What’s on the needles?

At this moment I only have ONE project actively on my needles (which is super rare for me!). It’s a gift for a friend’s daughter (pattern is Bláithín (junior) by Kate Davies). But I’ve just wound up a ball of Vesper Sock Yarn in the colorway “Twinkle Lights” to make myself some fun stripey Christmas socks (just plain vanilla ones). I’m also waiting for yarn to arrive for two Christmas gifts and one shawl design so I know that all of those will be cast on in the coming days! Then I will be back to my usual mess of WIPs! Having only one active WIP makes my itchy!

What is the Indie Gift-A-Long, you ask?

Well, it has two parts …

The first part is a sale on Ravelry.  The sale begins tomorrow (Nov 13th) and runs for just one week.  Almost 300 designers have put their best “gift” patterns on sale — 3822 patterns, at latest count. For the period of the sale, you can buy as many of those patterns as you like, all at 25% discount, using the code giftalong2014. My sale patterns include Mighty Mini, Hornburg, and lots of lace shawls.

The second part of the GAL is the KAL/CAL  …  join the Indie Design Gift-A-Long group on Ravelry now!  Seriously, you should do it.  All participating designers donated a minimum of five patterns as prizes, and most of us donated something else too, including YARN. Oh, yeah.  The list of prizes is truly drool-worthy (details on eligibility).  There are fun little games daily. Daily, I say!  And, all the added fun of crafting together with other people.

NEFF 2014 has come and gone! This year just confirmed my feeling that NEFF is my personal favorite fiber festival. Working the booth for A Hundred Ravens is a pleasure — Kate is a great boss, and it’s easy to sell her gorgeous yarn :). I love talking with customers and helping them find projects and yarn to make them … or yarn, and something to make out of it.

Here’s a quick peek of the booth, in case you missed out on NEFF …

Of course I “ran away from home” and did a little shopping too. Here’s my loot for the weekend:

I have projects for everything, except the fiber of course. (That has to turn into yarn before I can decide what to do with it.)  My not-fiber purchase is a beautiful wood yarn bowl from Dan Tracy Designs: 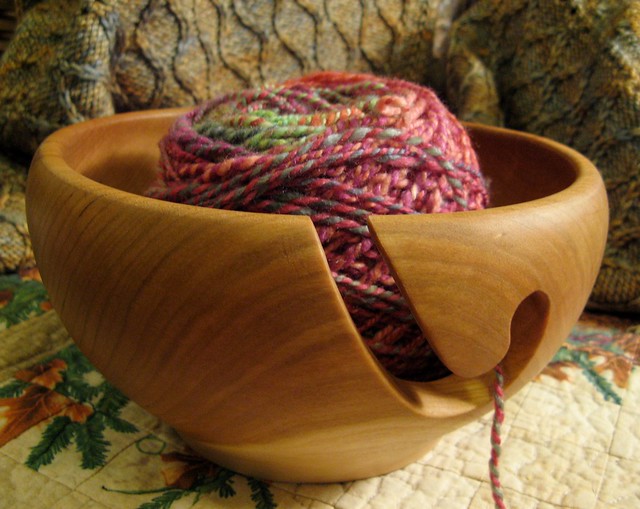 fiber — 8 oz of  pencil roving from Reflections of Roclans and two 4-oz braids of 75/25 BFL/Tussah roving from Play at Life: 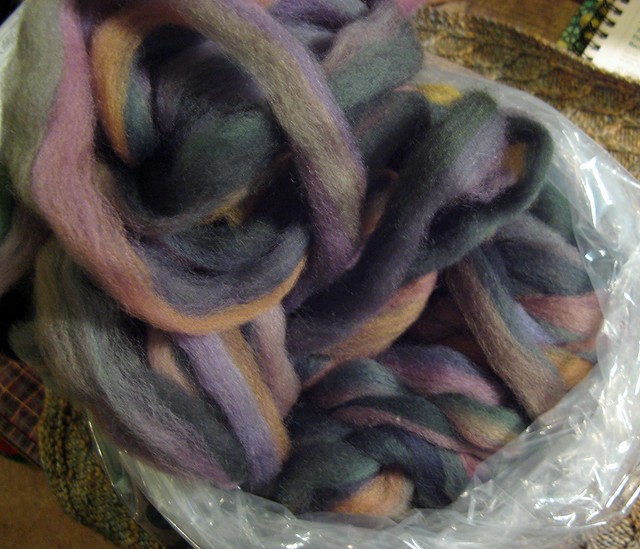 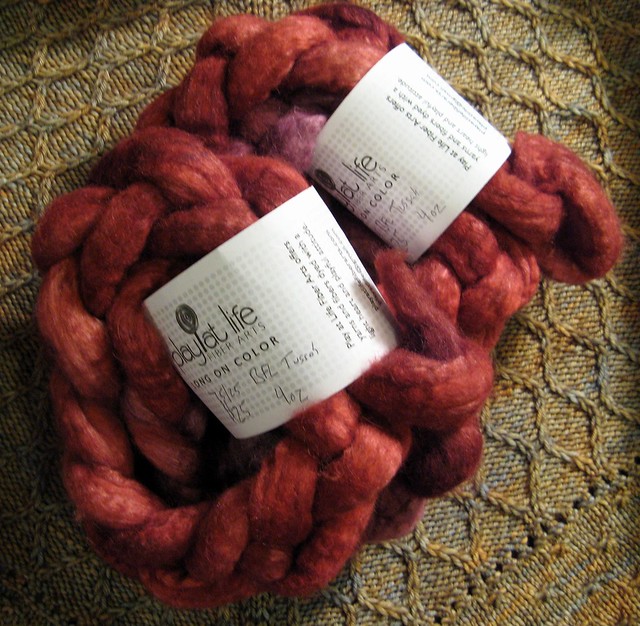 Shepherd’s Wool in “berries” to make a Colubrida Wrap: 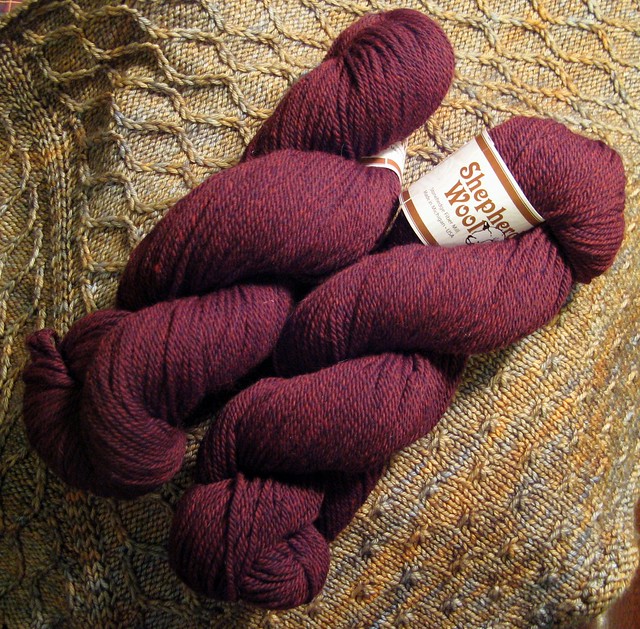 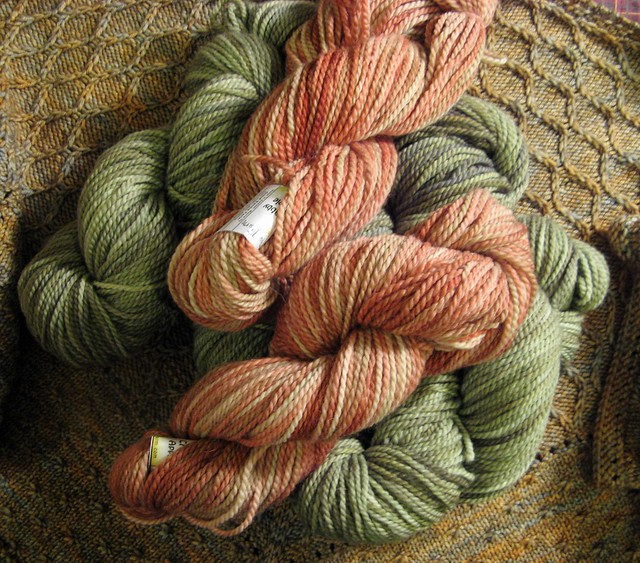 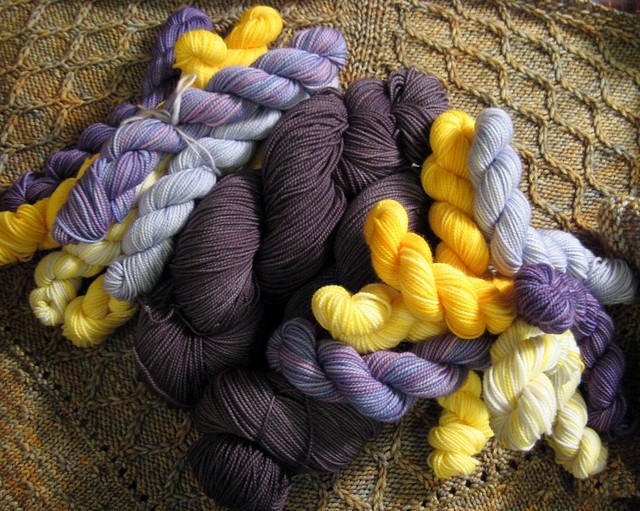 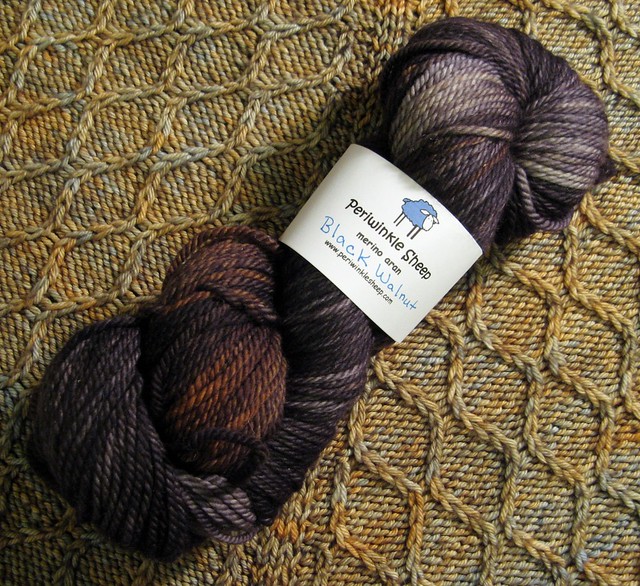 naturally-dyed DK from Heron Crossing Farm in Tansy/Indigo and Calendula/Indigo to make a Pen & Ink cowl: 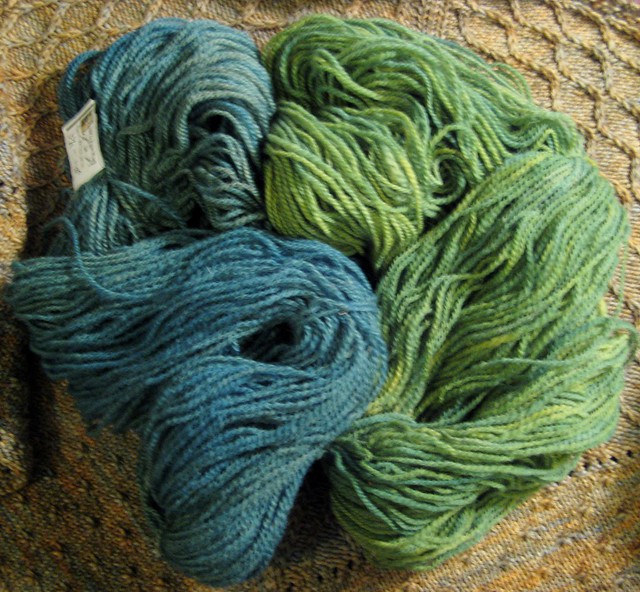 a stray skein of already-wound Aesir in Starry Night will become an Into Gold hat, eventually (the pattern isn’t quite available yet): 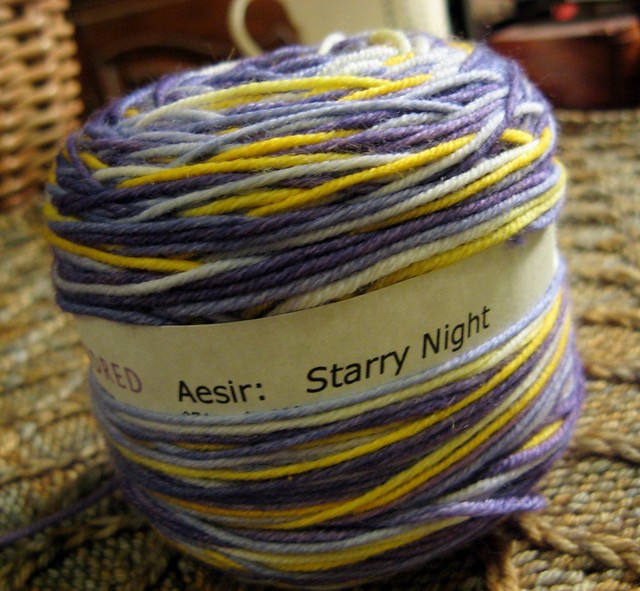 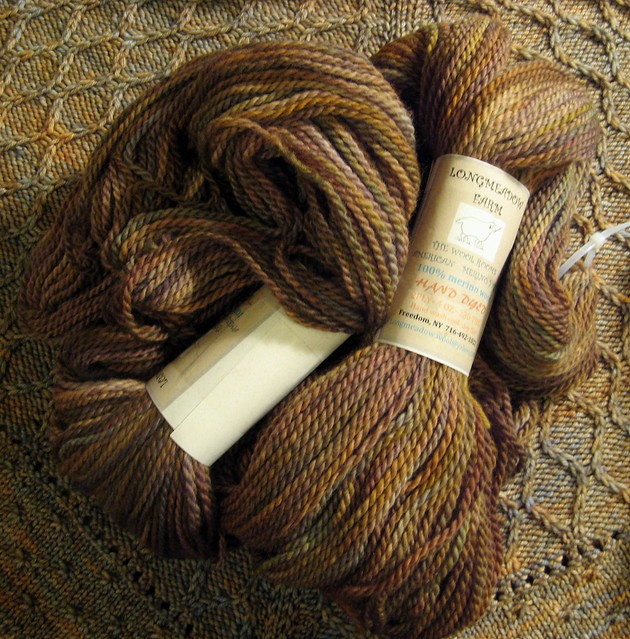 Last but not least, more Iachos in a custom colorway, dyed by yours truly after a long night of winding minis, destined to be When The Flowers Bloom: 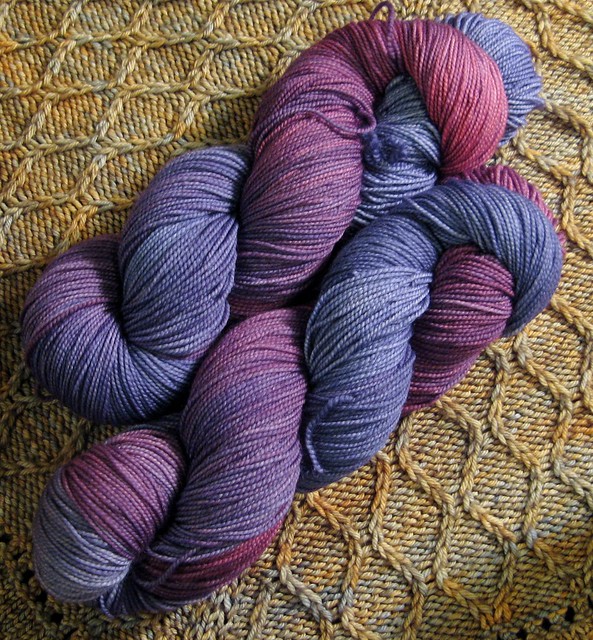