I have started work on a new design, pitched to me by Kate of A Hundred Ravens.  It’s a garment, it uses one of her minis sets, and it will be done for the spring season … beyond that, I’m not quite ready to share, except perhaps this photo: 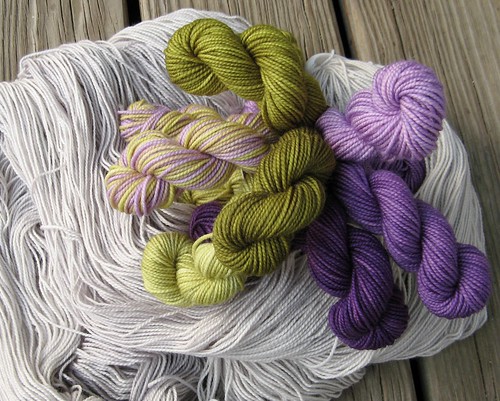 I’m working on a new design project … something in Danu, a one-skein cowl.  Kate’s brilliant idea was to make it so the knitter could knit it flat OR in the round — hence, “Your Way Cowl.”

I’m using my skein of Squonk from the Bestiary Yarn Club.

I tried out a couple stitch patterns … it’s always a challenge to find something interesting that doesn’t start a pitched battle with the colorway, when using highly variegated yarns like this one.  I think I’ve found the right one … but who knows, later tonight I may rip it all out! 😉

Hooray! My design submission to Dream In Color was accepted.  I’m making a lace shawl: crescent-shaped, bottom up, with optional nupps — in two sizes no less! DIC’s new Wisp is super pretty — according to the Ravelry page for Wisp, they released this yarn in a different put-up as part of the 2012 yarn club. I for one am glad to have it become part of their line.  The hand-painted colors just glow on the merino-silk blend.

My design will be in the “Brilliant” colorway:

This isn’t Wisp, of course — some other base.  But I will show you WIP photos to prove it’s just as pretty on the lace-weight Wisp!

Once the pattern is complete and fully tested and tech edited, I’ll be hosting a knit-along on my Ravelry group.  It won’t be a mystery this time — you’ll know what you’re getting into! — but I will provide support, cheerleading, and prizes to help motivate you.  The full size of the design will use two skeins of Wisp, but the pattern will also provide directions for a scaled-down version that only needs one skein.

This week I cast on for the second shawl in the “Airs Above The Ground” series.  This one is a half-circle with a notch for the neck, like Broken. I’m using the Styx skein from A Hundred Ravens:

The skein is dip-dyed in bright pink and a rich purpley black, so naturally it will pool and flash and stripe as the stitch count varies.  This is always a concern with using hand-dyed yarn that has a strong color difference … but in this case the pattern is working up well.  I’m using a simple and bold lace pattern, so that it doesn’t fight with the yarn — so far so good!

I’ve spent the last three-ish weeks knitting almost exclusively on a fingering weight sweater prototype for The Sock Report 2 (yay! still excited about this publication!).  If you know me at all, you know I am the exact opposite of a monogamous knitter.  In the last few weeks I know that I spent an hour working on  my Catkin shawl (as a reward for finishing the back of the prototype sweater), and I made about one hexipuff a day.  That’s it!  Normally, I will bring 3-4 projects along to a given knitting session, switching every hour or so to keep it fresh.  That’s just how I roll!

My work paid off: I finished the prototype with a few days to spare, and sent the pattern and sample off to the good people at The Sock Report for photography and tech editing.  You can imagine how antsy I was to cast on something NEW and DIFFERENT!  But of course I had all those neglected projects for me waiting in the wings too … so I compromised, and cast on for a new design project with this gorgeous BMFA Socks That Rock LW (Rare Gems):

I’m planning a three-design collection of one-skein fingering-weight small shawls.  I want to feature small/indy dyers — the STR for the first shawl is the most “mainstream” skein I’ll be using.  I’m also using a skein of “Cranberry” Merino/Tencel from Mind’s Eye (on the left) and a skein of “Walker” Barefoot Bohemian Sock from Bohemia Fibers. I had initially planned to use a fourth dyer as well … but the two skeins I picked from that dyer just didn’t “go” with the other three.  I will still design a fourth shawl, but it won’t be part of the collection.

So here’s a question, dear reader … what shall I name these three shawls? I had some pretty horse-related names picked out, but between the “Walker” skein (legit zombie) and the red/purple/blue of the other two, I’m sort of thinking of a zombie/monster theme might be better.  But, I don’t want to put off people who aren’t rabid zombie fans like me.  Hmmmmmmm.

Early last week I received a shipment of yarn from the UK.  All week I’ve worked almost exclusively on the prototype for a lacy summer cardi for KNIT Magazine.  The good news is … I’m nearly done!  I have a bit more of the back to do, then (short) sleeves, then it’s just wash, block, and ship.  Naturally I can’t share any photos or design details, but I think you’ll like it, when it comes out later this year.

The other knitting event in my life this week was hexipuffs: I have succumbed to the madness.  I have joined a mini-skein swap, and chopped up a skein of Butternut Merino/Tencel from Mind’s Eye Yarn.

I also dug through my box of sock-yarn-leftovers for all my “premium” bits, and I’ve made four puffs already. I am using puff-making as a reward for chugging through on the design project. Which is not to say that the design project is a problem (not at all — in fact it’s quick). Rather, I’m not usually a monogamous knitter, so I have to find ways to motivate myself to stay on task. Mostly.

In the last two weeks I’ve been working hard to get projects OFF the needles, but I also cast on two new projects.

The first I’m calling “Tornado Warning.”  It’s a design project, and for now I’m keeping the details top-secret because the construction is very unusual — maybe new? If it works out as expected, I will try to get it published somewhere cool, so lots of knitters can see.  I’m using gorgeous Thunderhead Tonal Stroll yarn — so pretty.

I also cast on for the Wilhemina KAL taking place on the WWMdFK group on Ravelry.  I’m using KP Imagination in “Castle Walls” — appropriate for a Dracula-inspired pattern, no?  If you haven’t already discovered Craft Lit, start listening now!  Heather is doing Dracula right now, and it is awesome.

I suppose it’s only right that the first book I  review be the book that inspired me to start a blog.  I’ve had Shannon Okey‘s slim, conversational, and extremely helpful book on my wishlist for quite a while.  As I hoped, I received a copy for Christmas and immediately devoured it.  I won’t claim to have read every word (because, well, I haven’t), but I have learned a lot of useful things.

One inescapable conclusion was that if I wanted to take this new knitting design thing that I’m doing seriously, I had to embrace social media.  Over and over again, Shannon and the designers that she interviewed emphasized how critical it is for a designer to have a web presence. There’s just no getting around it.  Certainly I expect to be able to find out about a pattern and it’s designer online, and I’m frustrated when I can’t.

In short, consider this new blog, as well as a new Remily Knits FaceBook page, proof positive of “message received.” (I’ve been on Ravelry for a while now.)

Aside from being strong-armed into joining the 2000’s (yes, I realize I’m a decade late to the wonderful world of blogs et al.), I was also glad to learn that a lot of my instincts so far had been right on.  Part of being a professional is, well, acting like a professional.  This means formatting emails and spelling words correctly, it means communicating clearly and in a timely fashions, and it means being polite at all times.  It means reading proposal and pattern guidelines closely, and checking twice to make sure I’ve followed them. Being professional means being careful about committing to deadlines, doing my level best to complete what I’ve promised, on time, and if I know I can’t or even think I might not be able to meet a deadline, I must tell the people waiting on me as soon as possible.

The book also provides a good outline of the design process: from “idea in my head” to published pattern can be a long road. I have (mostly) figured out the process on my own over the last year — designing, swatching, sample knitting, test knitting, tech editing, and more — but it is good to read that what I think is true mostly is.   The book includes great lists of online resources and software useful to the knitwear designer.  The most important new thing I learned was that I should be reading contracts much more carefully, and that it’s ok to ask for changes.  (It simply hadn’t occurred to me that this was even possible.  Next time a contract says that I will bear the full responsibility if the sample knit is lost in the mail, I may ask the company to alter that part!)

I know I’ll come back and re-read the interviews at least a couple times — there will be more to glean, as I get more involved in designing.  There are several topics that don’t apply to me just yet, but maybe someday they will (a book? really? a girl can dream!).