I honestly don’t know when I last posted about which new projects were leaping onto my needles …  let’s just say it’s been too long?  For a while, I was purposefully holding off on new projects, because I had a weekend retreat planned with my knitting circle, and I wanted to cast on a whole bunch of projects AT the retreat. Because of the way my brain works, every time I work on a project (or touch a finished object) I can recall all the places I worked on it, with nearly photographic intensity.  Often I can hear any music or conversation or (let’s be honest) the TV show that I heard while I was working on the project.

Every once in a while this backfires — for example, I had a really hard time finishing the socks I was working on at the Emergency Vet’s office while Gromit was getting a stick surgically removed from the roof of his mouth.  Every time I touched them, I was instantly back in the chilly waiting room, sitting on a hard plastic chair and shivering, waiting to hear how Gromit was.  I can smell the antiseptic, not really covering up the faint odor of blood and other bodily fluids.

But, most of the time, my “mental souvenir” in the form of knitting projects is a boon! I think everyone in the group cast on at least one new project, for a total of 17 new WIPs!  Of these, seven were mine. Whee!

I’m using my handspun for this — I’m insanely pleased with this handspun, and it needed a special project! The highly textured and lacy Renaissance Shawl (by Anne-Lise Maigaard) is just the thing.  The pattern has optional beads, on which I am opting out, because the handspun is a little crazy color and doesn’t need any gilding. As of today, I’m about 25% done with this one. 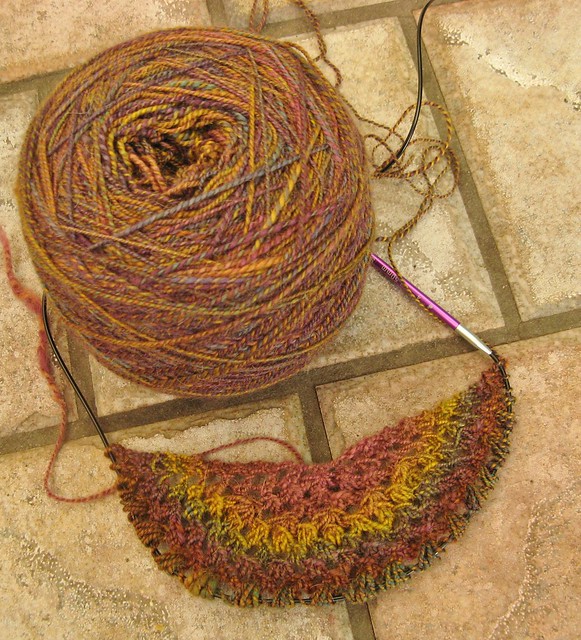 Technically, this started life as a hat, but I was knitting a tad loose and the brim was clearly too large. Rather than rip and try again, I used the most excellent suggestion of Marilyn to just make it a cowl instead.  It turned out awesome — soft and squishy and just the right size.  I gave it to my friend Judy :). 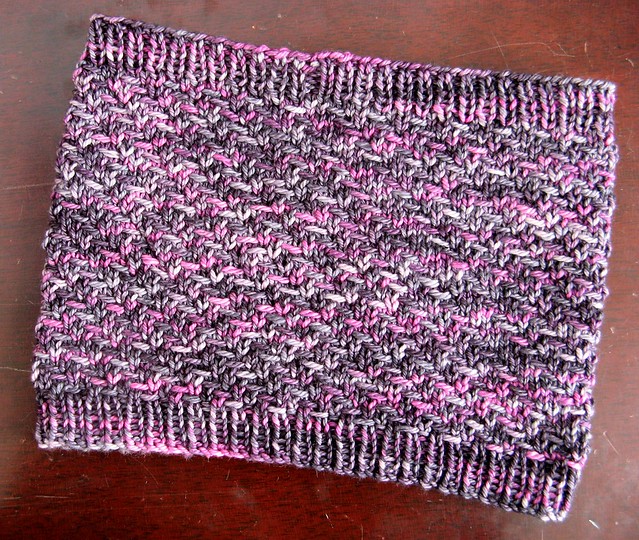 Some of us are doing Boo’s Sweet Dreams shawl as a casual KAL … I haven’t made much progress on it, because I was knitting like mad on a different Boo shawl … I’ll post about that on a future FO Friday. My KAL yarn is from Vogue Knitting Live … I totally love the bright green springy colorway. 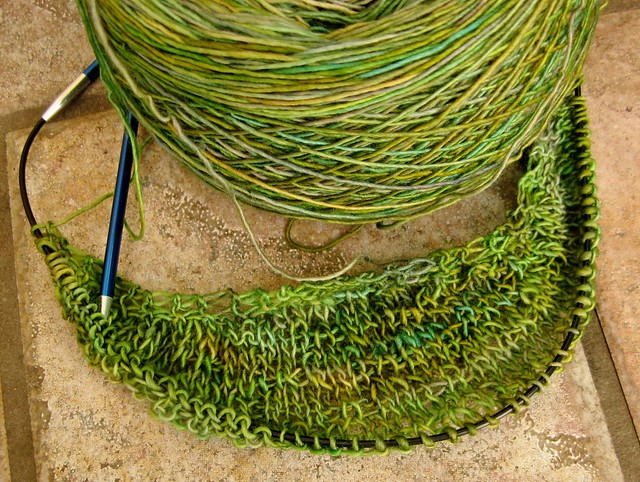 I used a skein of self-striping DK yarn from White Birch to make some squishy house socks. They came out a tad large, but still totally wearable in slippers or boots. 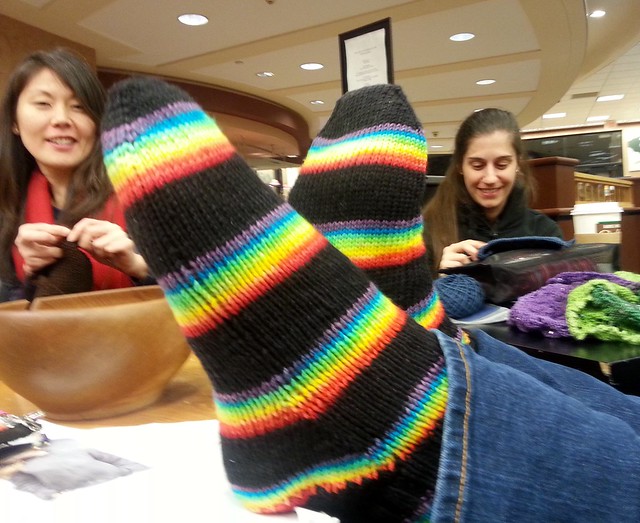 I paired a skein of brightly-colored “Impatiens” with a skein of leftover “Mist” to make a cheerful shawl … as of this writing, I’m about halfway through the two-tone garter-stitch body 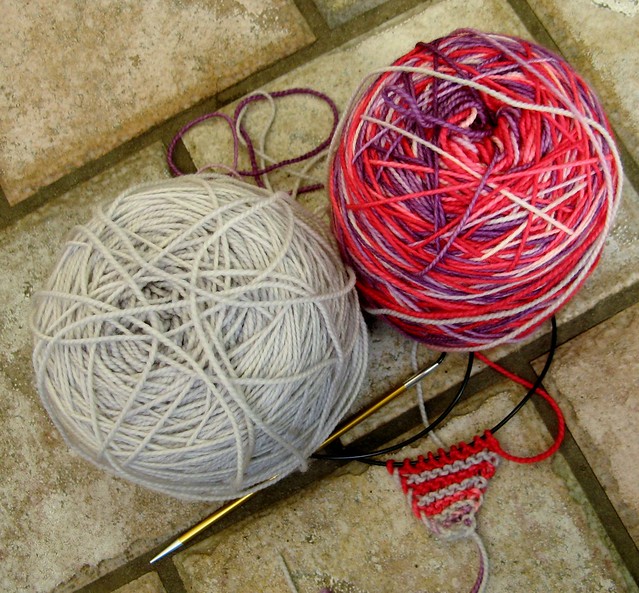 My oh my, the pattern for these socks is high concept! And, alas, kind of painful to knit. And I’m starting to worry about fit. So, this WIP wins “most likely to be frogged,” but for now it is still on the needles. 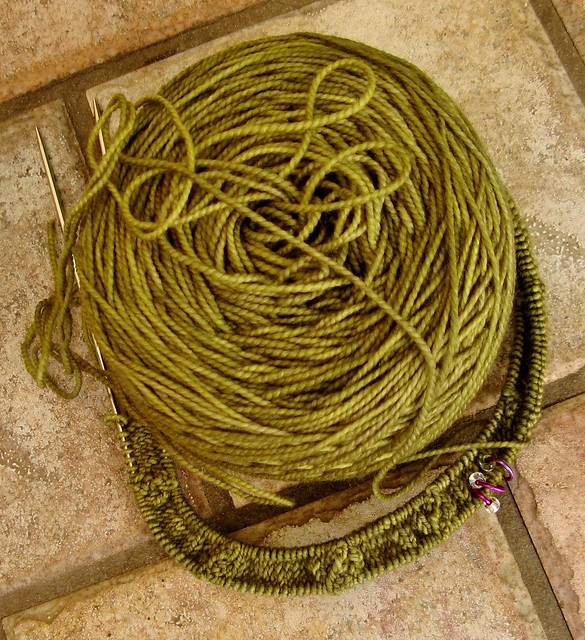 A big fluffy skein of super-bulky yarn in bright yellow-green? I’m turning this one into a upsized Hornburg.  No slipped stitches, fewer stitches and fewer repeats … it’ll be done lickety-split. 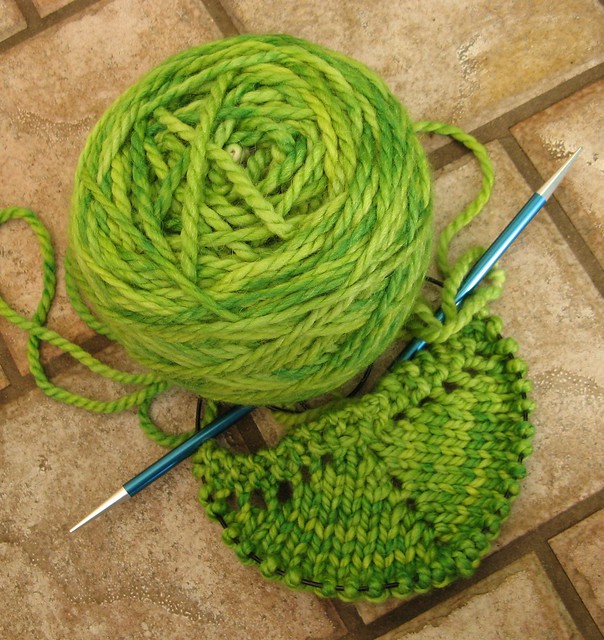